Would you like to switch to the accessible version of this site?

Don't need the accessible version of this site?

All About Botox, Jeuveau, and Xeomin.

These products are described as neuromodulators because they temporarily stop communication between nerves and muscles. As we mature, the muscles in the face increase in tone and can cause frown lines, crow's feet and forehead lines. When we relax the overly tense muscles, these lines disappear, resulting in a more relaxed, refreshed appearance. The injection of neuromodulators is the most popular cosmetic procedure performed in the U.S.

Botox and Jeuveau are structurally very similar. Xeomin is a lighter compound because accessory proteins found in Botox and Jeuveau have been removed. Xeomin contains just the portion that causes the relaxation effect. Because of variation in our individual biologies, it's nice to have a choice of products from which to choose.

Before and After Botox (Crow's feet/wrinkles next to eyes) 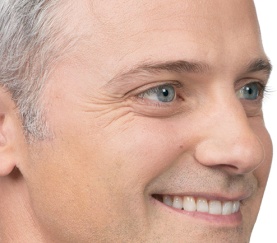 When used to treat facial wrinkles, the effects of these medications last around three months (4 months if you are lucky). However, when used to diminish excessive sweating or enlarged masseters, the effect can last six months or more. Botox has many other uses including diminishing migraine headaches, alleviating muscle spasms, and uncrossing crossed eyes (stabismus). Due to the increased bulk of the muscles in men, they usually require more Botox to treat a given area than women do.

At The Skin Renewal Center Montrose, Houston, we use Botox, Jeuveau, and Xeomin to allow our patients to look naturally refreshed with nary a frown. When used in combination with fillers, we can truly create a more youthful appearance. Some clinicians call the combination of neuromodulators and fillers "The Liquid Facelift."

Before and After Jeuveau (Frown lines)

Dr. Patrick McNamara is well versed in the anatomy of the face. He knows precisely where to inject Botox, Xeomin, or Jeuveau to achieve the effect our patients desire. The medication then slowly diffuses through the surrounding tissue for about four hours. During this period, it is extremely important that you maintain your head in an erect position to prevent unwanted movement of the neuromodulator. You can shop, dine, and watch television (sitting upright). You should not get a massage, work out, or lie down for four hours after your treatment.

Botox, Xeomin, and Jeuveau will begin to relax the targeted muscles as soon as 3-4 days. Although most patients have cosmetic improvement in two weeks, maximum effect may take up to 4 weeks to occur. Our goal at The Skin Renewal Center is for you to look refreshed and natural.

Botox, Xeomin, and Jeuveau in cosmetic doses are quite safe. They are easy to administer with virtually no downtime. Eliminating frown lines, wrinkles on your forehead and around your eyes can make a huge difference in your appearance. You look relaxed, not angry. You will look rested, not tired. Best of all, you will feel great!

Before and After Xeomin (Frown lines)

Are you interested in Botox, Jeuveau, or Xeomin?
Call The Skin Renewal Center in Montrose, Houston, TX
at (713) 533-0800 to schedule a consultation today!

Find us on the map